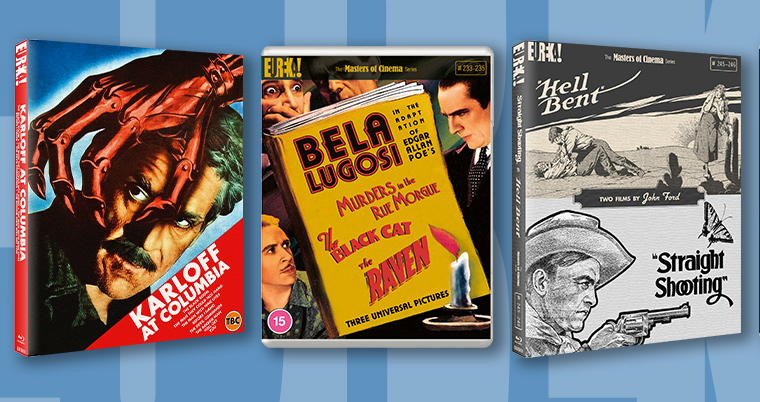 This month’s giveaway features a collection of essential films from one of the most recognisable figures in Horror; two early films from arguably the greatest Western director of all time; and a re-issue of Three Edgar Allan Poe Adaptations Starring Bela Lugosi.

One of the most recognisable faces in horror, Boris Karloff has been described as “to the horror movie what Fred Astaire was to the musical”. Presented in Karloff at Columbia are the six films (The Black Room, The Man They Could Not Hang, The Man With Nine Lives, Before I Hang, The Devil Commands, and The Boogie Man Will Get You) he made for Columbia Pictures, a collaboration which produced some of Karloff’s finest acting roles.

The Masters of Cinema Series is also proud to present this month two early features from John Ford in their UK debuts on home video, fully restored in 4K.  A landmark in the history of the Western, Straight Shooting, will be featured alongside Hell Bent, both films star Harry Carey.

The horror films Murders in the Rue Morgue, The Black Cat, and The Raven—are distinguished by a trio of factors regarding their production. Most notably, each film is based on a work by master of the macabre Edgar Allan Poe. Part of the legendary wave of horror films made by Universal Pictures in the 30s, all three feature dynamic performances from Dracula‘s Bela Lugosi, with two of them also enlivened by the appearance of Frankenstein‘s Boris Karloff. And finally, all three benefit from being rare examples of Pre-Code studio horror, their sometimes-startling depictions of sadism and shock a result of being crafted during that brief period in Hollywood before the enforcement of the Motion Picture Production Code’s rigid guidelines for moral content. Significant and still unsettling early works of American studio horror filmmaking, these three chillers demonstrate the enduring power of Poe’s work, and the equally continuous appeal of classic Universal horror’s two most iconic stars.

To enter, simply follow one or more of the instructions in the box below. Competition closes at 12:00 (BST) 21 May 2021. Terms and Conditions apply.