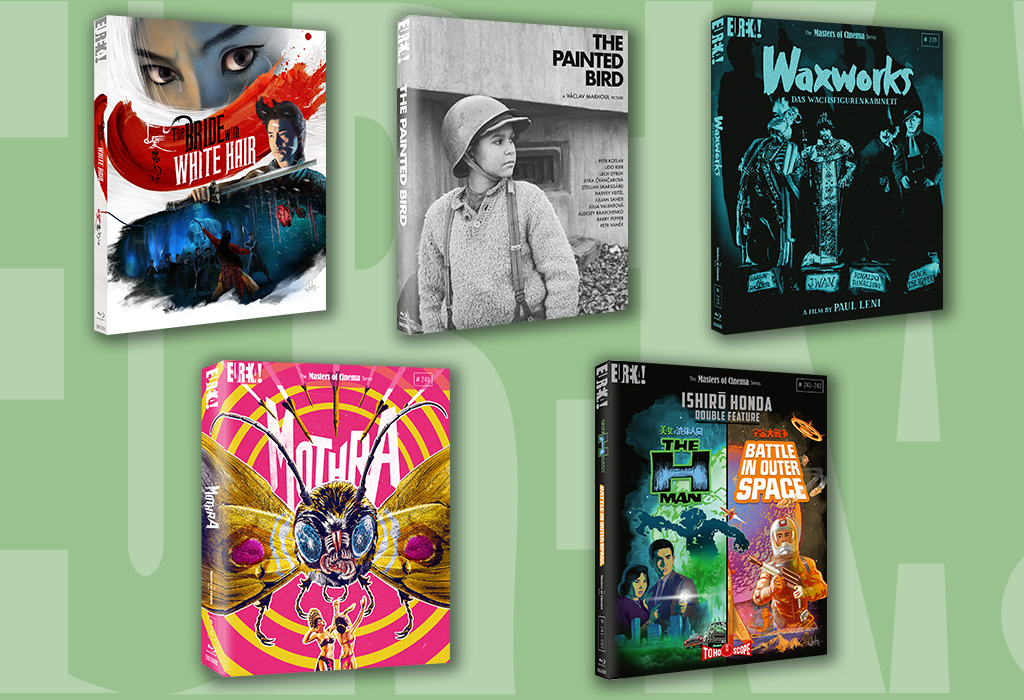 We’ve got a bumper giveaway this month featuring monster and sci-fi classics, kung-fu fantasy extravaganza, a landmark in German expressionism PLUS the movie adaptation of Jerzy Kosinski’s controversial novel.

Ronny Yu (The Phantom Lover; Warriors Of Virtue; The Bride of Chucky) directs this highly operatic fable based on a well-known martial arts novel with Leslie Cheung (A Better Tomorrow; Farewell, My Concubine) and Brigitte Lin (Zu Warriors from the Magic Mountain; Police Story) as doomed lovers caught in the crossfire of warring clans. With beautiful cinematography by Peter Pau (Crouching Tiger, Hidden Dragon) and over-the-top action sequences, The Bride with White Hair is one of the best swordplay fantasy films ever made.

Waxworks [Das Wachsfigurenkabinett] w​as the final film Paul Leni directed in Germany before striking out for Hollywood and making such classic works of genre filmmaking as ​The Cat and the Canary,​ ​The Man Who Laughs​, and ​The Last Warning. Its sophisticated melding of genres was in fact what inspired Universal’s Carl Laemmle to invite Leni to come to Hollywood in the first place, as Laemmle was hoping to capitalise on the emerging comedy-horror craze of the 1920s. Yet ​Waxworks ​is, at heart, a pure example of German expressionism.

Featuring a staggering central performance from the young Petr Kotlár alongside a star-studded international ensemble including Udo Kier, Stellan Skarsgård, Harvey Keitel, Julian Sands and Barry Pepper. The Painted Bird has won ecstatic acclaim, with The Guardian’s Xan Brooks describing the film as “a monumental piece of work” rewarding the film with a five-star review. Shot in crisp black and white 35mm – Václav Marhoul’s The Painted Bird does far more than simply depict the horror of war. It is an unflinching examination of the very worst of humanity.

One of the most iconic Japanese kaiju, Mothra has appeared in over a dozen feature films. Presented here is her debut, a gloriously vibrant piece of filmmaking that forever changed how kaiju eiga would be produced in Japan. Psychedelically colourful, with an intelligent, benevolent protector as its lead kaiju, Mothra was radically different to every other monster movie that had come before it, and it remains a classic of the genre to this day.

Travel back to the days before CGI, when special effects were real and the results were spectacular! A sci-fi double, featuring Director Ishiro Honda’s extravagant space adventure flicks, The H-Man / Battle in Outer Space  will be released on Blu-ray for the first time on home video in the UK. Honda and special effects wizard Eiji Tsuburaya bring these wildly colourful kaiju eiga to life, both films are classic cult Japanese sci-fi gems which simply can’t be missed.

To enter, simply follow one or more of the instructions in the box below. Competition closes at 12:00 (BST) 17 December 2020. Terms and Conditions apply.