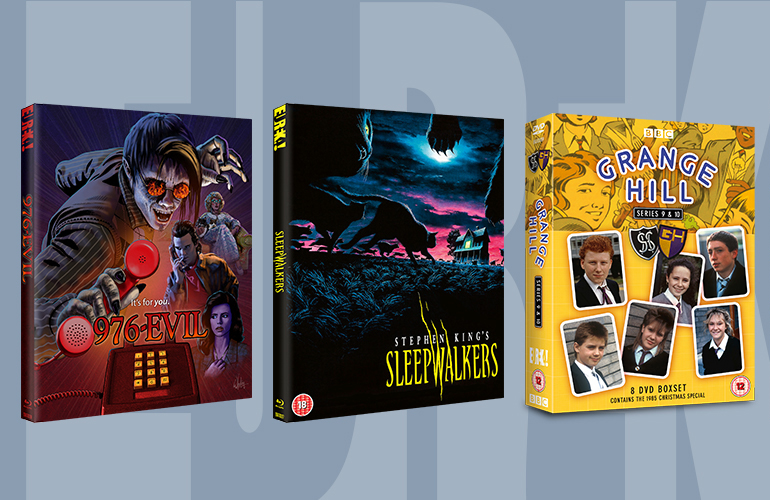 This month’s giveaway features an outrageously enjoyable ‘80s horror from Robert “Freddy Krueger” Englund; Stephen King’s supernatural thriller about the small-town exploits of shape-shifting, incestuous, psychic vampires; and the next instalment of one of the greatest children’s TV show of all-time.

Director Robert Englund (the iconic Freddy Kruger from the Nightmare on Elm Street series) dials up a gothic tale of high-tech horror in 976-EVIL. Co-written by Brian Helgeland (L.A. Confidential, Mystic River) and featuring incredibly practical effects work from Robert Kurtzman and Howard Berger, Eureka Classics is proud to present 976-EVIL on Blu-ray for the first time in the UK.

Stephen King’s Sleepwalkers, starring Brian Krause, Mädchen Amick (Twin Peaks), and Alice Krige (Chariots of Fire) is a classic horror story that takes a perfect Normal Rockwell town… and turns it inside out. Making its debut on Blu-ray in the UK featuring a Limited-Edition O-Card Slipcase and Collector’s Booklet.

Last but not least, due to the outstanding success of the previous Grange Hill Series 5 & 6 DVD release in 2018, and Grange Hill Series 7 & 8 DVD release in 2019, Eureka is proud to announce the release Grange Hill Series 9 & Series 10 Boxed Set. Available to own for the very first time from 19 October 2020, the boxed set features all 48 episodes from series 9 & 10, originally broadcast in 1986 and 1987. Series 9 features the Zammo McGuire controversial drug addiction storyline which inspired the famous anti-drugs ‘Just Say No’ campaign. Also included for the very first time – The 1985 Christmas Special Episode (First broadcast 27th December 1985- pre-series 9).

To enter, simply follow one or more of the instructions in the box below. Competition closes at 12:00 (BST) 13 November 2020. Terms and Conditions apply.