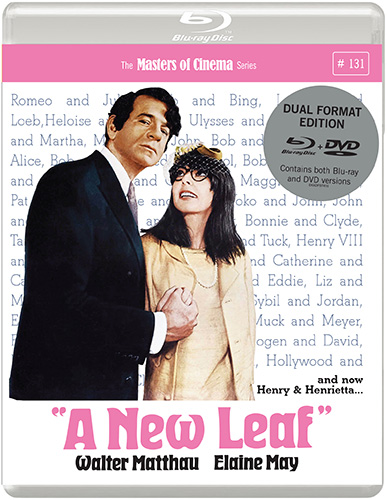 One of America’s greatest comic legends, Elaine May, made her debut as writer and director in the wonderful A New Leaf. Unanimously acclaimed from the start, but unavailable for many years, it now stands as a classic alongside Harold and Maude, Bananas and M*A*S*H* as a key film in the new direction of American screen comedy in the 1970s.

The great Walter Matthau stars as Henry, a once-rich playboy who has obliviously spent his entire inheritance. Desperate to marry into further financial support, he meets Henrietta (Elaine May), a shy, awkward, though independently wealthy botany professor. What follows is a giddy tale of dubious legal advice, ruthless skullduggery and ferns.

A most unorthodox romantic comedy, stuffed with deadpan hilarity and brilliant comic invention, The Masters of Cinema Series is proud to present its UK home video première in a new Dual-Format edition.

“a modern screwball on par with the classics” – Little White Lies

“deft mix of erudition, slapstick and pitch-black wit, and the stars’ off-kilter chemistry is a joy ★★★★★” – Total Film