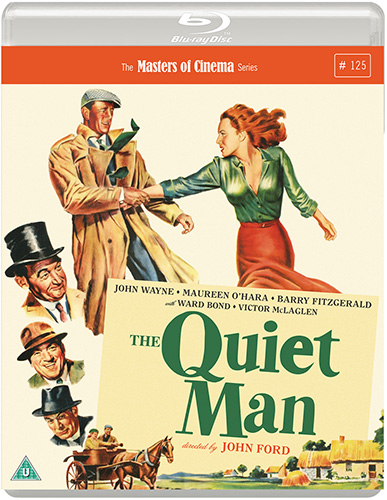 An exemplary entry in the filmography of master director John Ford, The Quiet Man contains all the aspects that mark Ford’s work: a poetic, deeply felt sentiment for an unregainable past, for tradition and ceremony, for the country of Ireland and its emigrant bloodlines, for the camaraderie within community, and for the profound yet mutable bond of the marital union. Within a seven-decade career filled with high points, The Quiet Man represents one of Ford’s highest, and from his richest period.

Set in the 1920s, The Quiet Man stars John Wayne as Sean Thornton, an Irish-born American who has travelled to his birthplace of Innisfree to lay claim to his family farm. Although warmly embraced by the denizens of the village, Thornton’s outsider status is thrown into relief when the abrasive landowner Squire Will Danahan (Victor McLaglen) objects both to the turnover of the land, and to the handing over of his sister Mary Kate’s (Maureen O’Hara) dowry to the man whose community stature now threatens to show up his own. What follows is a confrontation with custom and with the personal past, all before an unforgettable extended brawl sprawling the entire very countryside whereupon nothing less hinges than the peace of Innisfree itself.

Winton Hoch’s astonishing Technicolor cinematography (for which he won an Academy Award) has cemented the images of The Quiet Man within the minds and hearts of viewers across the decades. This is a film that, with its epic, yet intimate, canvas and its near-Shakespearean sense of character only grows in power over time and the more times it is seen. It is an ideal entry-point into Ford’s massive body of work, and a summation of his art; as a result, Ford was awarded the 1952 Oscar for Best Director. The Masters of Cinema Series is proud to present The Quiet Man on Blu-ray in the UK for the first time.

“this is a wonderful movie, a truly lovely, warm-hearted [without ever seeming cloying] whimsical romantic comedy that truly is the kind of film that they don’t make ‘em like anymore…” – Horror Cult Movies

“an adorable slice of nostalgia 9/10” – Starburst