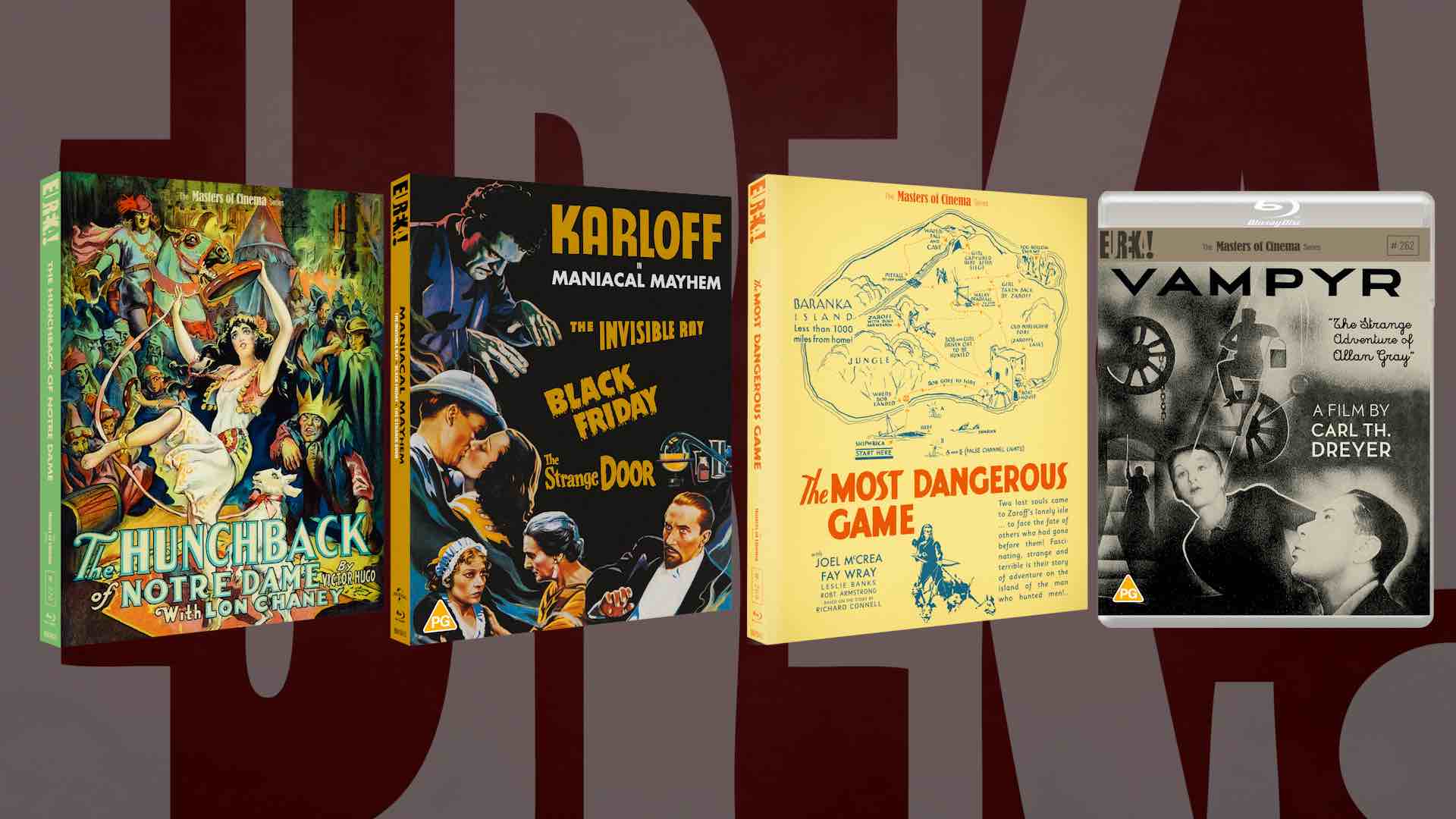 Eureka! has announced its October 2022 line-up today as it delivers a quadruple threat of Horror / Thriller gems. Featured amongst this line-up are a classic horror from the makers of King Kong; a million-dollar super-production of a Victor Hugo novel; three more tales of terror from the vaults of Universal Pictures; plus a Standard Edition re-issue of Vampyr.

Based upon the ever-popular short story by Richard Connell, The Most Dangerous Game remains a hugely influential masterpiece 90 years after its release.  Taking full advantage of the lavish jungle sets created for King Kong; The Most Dangerous Game was filmed at night after filming for Kong had concluded for the day, with many cast and crew pulling double duty on both productions. After 90 years, it is still a thrilling piece of filmmaking – filled with stunning production designs, wonderful optical effects, and—of course—thrilling action. The Masters of Cinema Series is proud to present The Most Dangerous Game in its UK debut on Blu-ray, from a 2K restored scan of the original camera negatives.  Available from 24 October 2022, the first print-run of 2000 copies will feature a Limited-Edition O-card Slipcase.

Perhaps the grandest of Universal’s silent films—and featuring arguably its first iconic movie monster—The Hunchback of Notre Dame stars Lon Chaney in the role which transformed him from a respected character actor to a global superstar. A “Super Jewel” adaptation of Victor Hugo’s novel, Universal spared no expense on this lavish production, and were rewarded with the most financially successful silent film they had released up to that point. Lon Chaney’s performance and make-up work are already legendary, but the rest of the film is as deserving of praise – a beautiful nightmare now fully restored in 4K and making its UK debut on Blu-ray as part of The Masters of Cinema series.  Available from 17 October 2022, the first print-run of 2000 copies will feature a Limited-Edition O-card Slipcase.

For the third release of the month Eureka! dive into the Universal Pictures vaults to present another trio of horror tales, all starring the iconic Boris Karloff.  Béla Lugosi stars alongside Karloff in The Invisible Ray (dir. Lambert Hillyer, 1936), which sees Dr Janos Rukh (Karloff) exposed to a mysterious element that turns him into a deadly luminescent maniac who devises a plot to bump off his personal and professional rivals.  Then, in Black Friday (dir. Arthur Lubin, 1940), Karloff is the amoral brain surgeon, Dr Sovac, who transplants part of a gangster’s brain into the body of his dying friend, creating a terrifying Jekyll-and-Hyde figure who starts murdering his former criminal associates (including, again, the wonderful Béla Lugosi).  Finally, the incomparable Charles Laughton plays the sadistic Sire Alain de Maletroit in The Strange Door (dir. Joseph Pevney, 1951). Maletroit has kept his own brother locked in a dungeon for twenty years, and now wants to ruin the life of his niece by forcing her to marry a violent rogue. His plan is upset when the “rogue” is unexpectedly noble-hearted and attempts to rescue the girl, aided by an abused servant (Karloff).  Available from 17 October 2022, the first print-run of 2000 copies will feature a Limited-Edition O-card Slipcase & Collector’s Booklet.

Last, but not least, is a Standard Edition re-issue of Vampyr. The dreamlike tale of an occult-obsessed student’s visit to a small French village, as he is drawn into the unsettling mystery around a stricken family’s struggle with malevolent forces, remains an unparalleled evocation of the uncanny.  Presented from a 2K restoration by the Danish Film Institute, supported by the MEDIA program Creative Europe, and taking more than a decade to complete – materials from several European archives (including the BFI, CNC and DFI) have been meticulously scanned and assessed to create the highest quality and most faithful version of Vampyr possible. Unveiled for the film’s 90th anniversary, one of the most visually and aurally distinctive horror films ever made comes to Blu-ray in a Standard Edition, in a definitive incarnation that achieves the full experience Dreyer intended audiences to have.  Available from 17 October 2022.