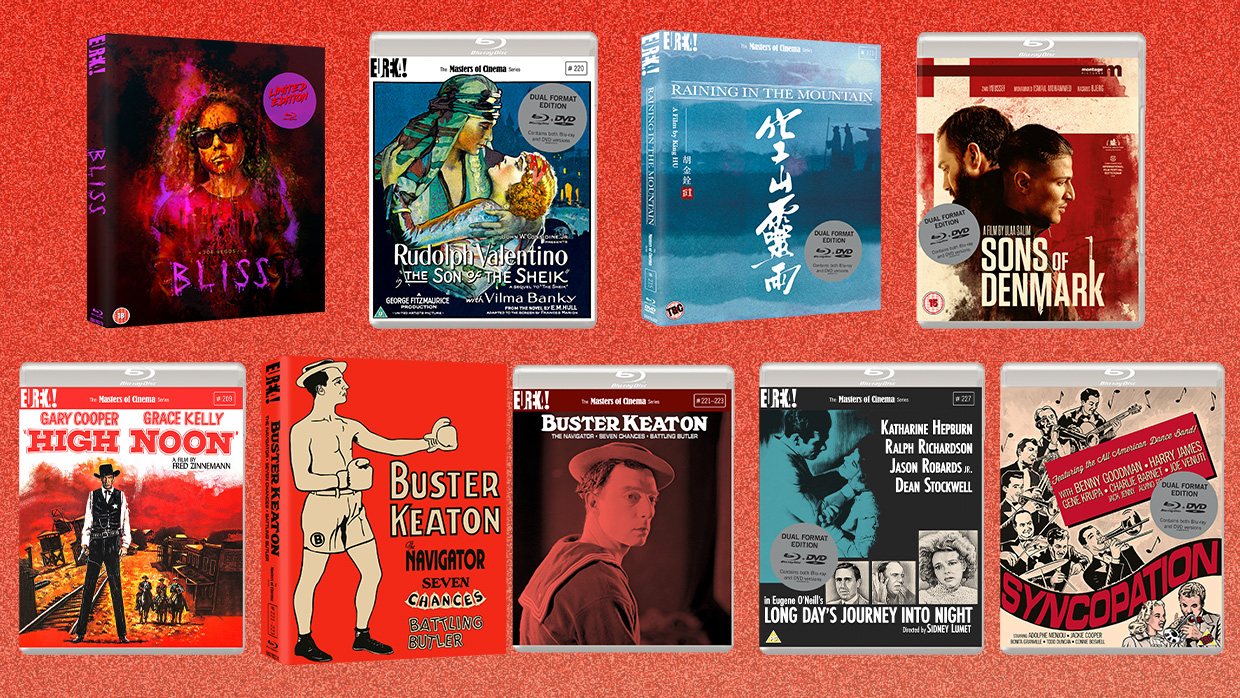 Eureka’s February & March 2020 line up has been revealed

Eureka have announced their February and March 2020 line up today which will feature a blood-drenched voyage of drug-fuelled hysteria, one of the silent era’s most popular films, a spiritual Buddhist fable from King Hu, an ambitious and timely political thriller set in near-future Denmark, William Dieterle’s tribute to the evolution of jazz, Sidney Lumet’s epic and emotional adaptation of one the great American stage plays, a further collection of essential films from a genius of silent comedy, plus a re-issue of High Noon.

Director Joe Begos’ (The Mind’s Eye AKA Supernatural Forces) third feature, Bliss has drawn comparisons to the films of Gaspar Noé (Irreversible, Climax) and Abel Ferrara (Driller Killer, The Addiction). Released in both a Limited Edition (Encased in a silver laminate finish O’Card slipcase and Collector’s booklet) & Standard Edition on 10 February 2020, Eureka Entertainment is proud to present this blood-drenched masterpiece on Blu-ray.

One of the most popular films from the silent era, director George Fitzmaurice’s The Son of the Sheik stars Rudolph Valentino who gives perhaps the finest performance of his career.  From a new restoration available for the first time on home video, and featuring a magnificent score by maestro Carl Davis, The Masters of Cinema Series is proud to present George Fitzmaurice’s The Son of the Sheik on Blu-ray for the first time in the UK in a Special Dual Format edition available from 17 February 2020.

With hints of Martin Scorsese and Jacques Audiard, director Ulaa Salim taps into a political climate that will feel all too familiar for audiences across Europe in the ambitious dystopian thriller, Sons of Denmark, released as part of the Montage Pictures range in a Dual Format edition on 17 February 2020.

Set in a remote Buddhist monastery in 16th Century China, Raining in the Mountain deals with a power struggle that ensues when the Abbot of the Three Treasures Temple announces his imminent retirement.  Selected as one of the Best 100 Chinese Motion Pictures by the Hong Kong Film Awards in 2005, The Masters of Cinema Series is proud to present King Hu‘s masterfully choreographed, spiritual fable on Blu-ray and DVD for the first time in the UK, from a new 2K restoration completed in 2018 by the Taiwan Film Institute. The first print-run of 2000 copies will feature a Limited-Edition O-card Slipcase, and will be released on 24 February 2020.

For those who missed out on the sumptuous Limited Edition of High Noon from earlier this year, March will feature a re-release of Fred Zinnemann’s iconic western starring Gary Cooper and Grace Kelly. This standard edition may be minus all the Limited Edition’s bells & whistles but the disc with its stunning 4k restoration & extras remains. Released on 2 March 2020.

Adapted directly from the play by Eugene O’Neill, Long Day’s Journey into Night (Starring Katharine Hepburn, Ralph Richardson, Jason Robards, Jr. and Dean Stockwell) is a four-act study of addiction and recrimination that the playwright claimed was written “in tears and blood”. Directed by Sidney Lumet (Serpico, The Offence), whose instinctive understanding of adaptation and near-telepathic rapport with actors made him the perfect director for the material (Lumet had previously adapted O’Neil’s The Iceman Cometh into an acclaimed TV drama), The Masters of Cinema Series is proud to present Long Day’s Journey into Night in its UK debut on Blu-ray and DVD in a Special Dual Format edition. Released on 16 March 2020.

Covering a quarter-century of American “syncopated” music (ragtime, jazz, swing, blues, and boogie woogie), Syncopation features music from the turn of the 20th century through prohibition, the Great Depression, and the outbreak of WWII. Featuring jazz greats Benny Goodman, Charlie Barnet, Gene Krupa, Harry James, and more, Syncopation will be released on 16 March 2020, presented from a stunning 2K restoration and available for the first time in the UK on home video, in a special Dual-Format edition as part of the Eureka Classics range.

Between 1920 and 1929, Buster Keaton created a peerless run of feature films that established him as “arguably the greatest actor-director in the history of the movies”. Now, collected together are three further films from that era; The Navigator, Seven Chances and Battling Butler. The Masters of Cinema Series is proud to present all three films from stunning 4K restorations in their UK debuts on Blu-ray, from 30 March 2020, featuring a Limited Edition 60-page Perfect Bound Collector’s Book and Limited Edition Hardbound Slipcase [3000 copies ONLY].